Read about our projects and successes in a new format: our Annual Reports. 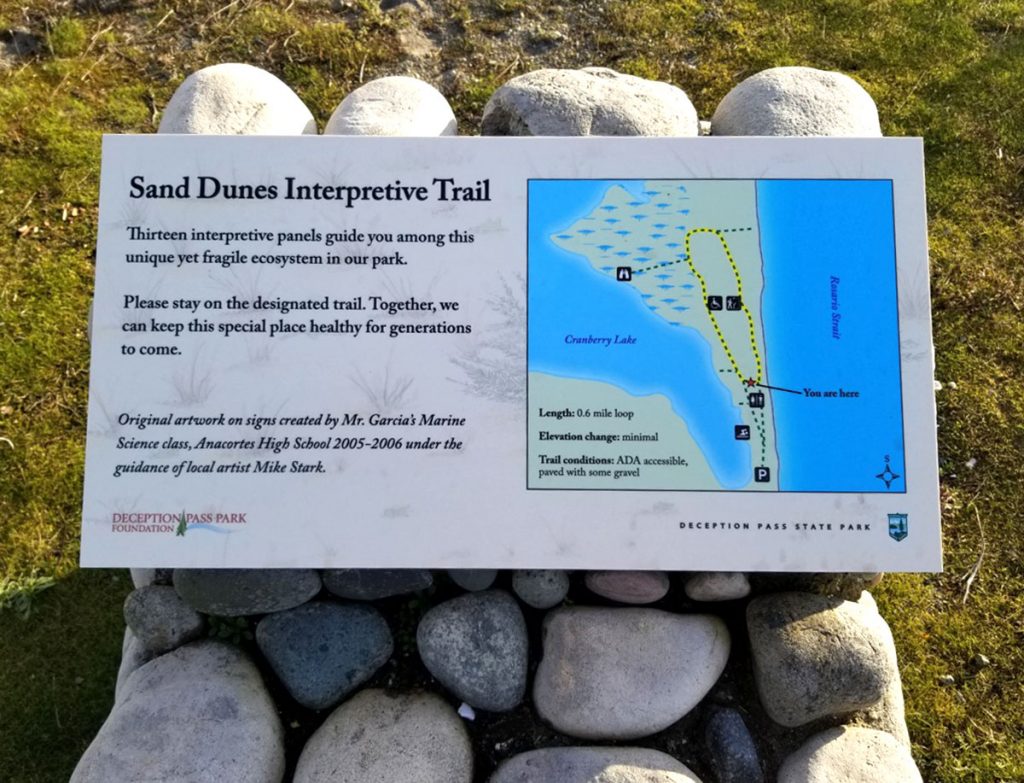 A generous Foundation patron donated funds to replace the 18 aging interpretive panels at the West Beach Sand Dunes.  These signs detail the natural history of the area and other nearby ecosystems. 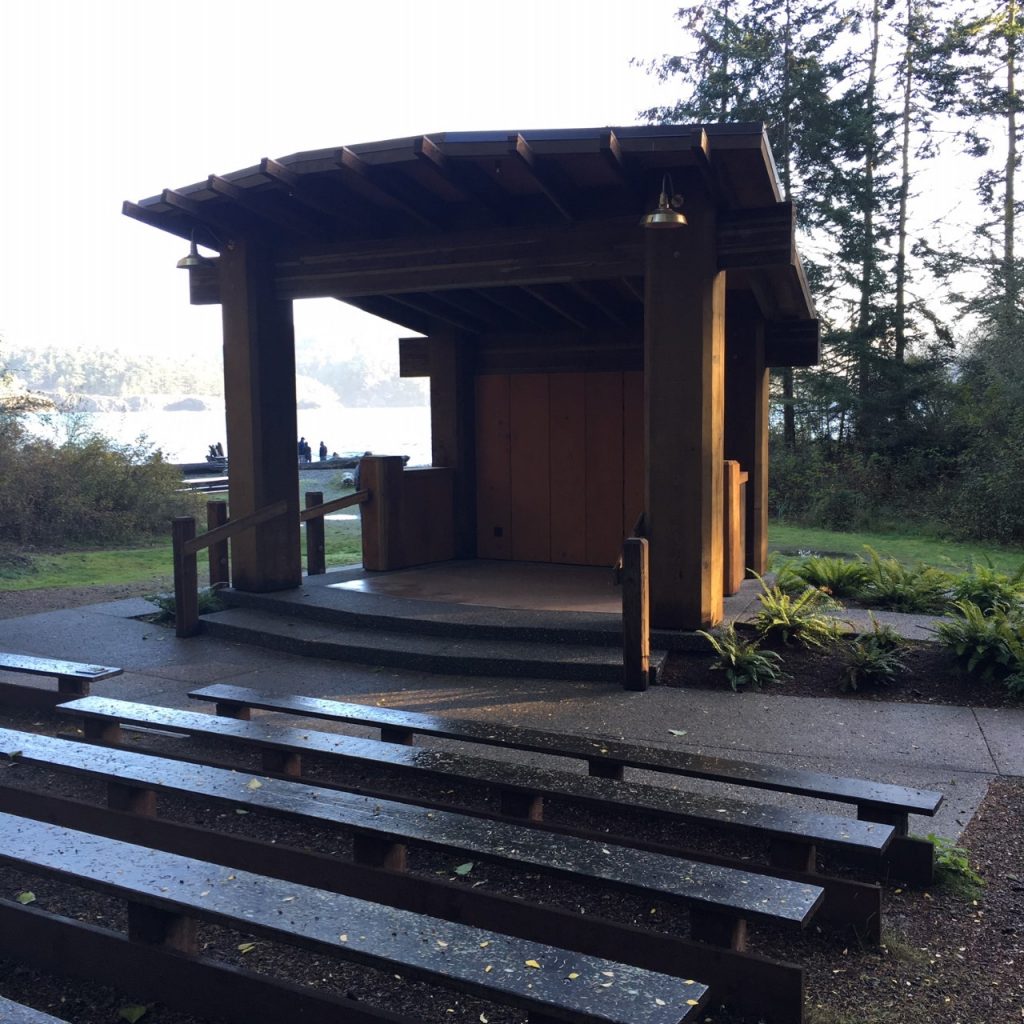 Thousands of people attend programs at the Deception Pass State Park Amphitheater every year.  The venue is host to park programs like Arts in the Park, interpretive talks, summer lecture series, and events for community groups from Oak Harbor, Anacortes and beyond.

When the footbridge at the beginning of the trail to Lighthouse Point and Lottie Bay began to give way, the Whidbey Island Retired Chief Petty Officer’s Association stepped up to construct a new one. The Retired Chiefs contributed hundreds of volunteer hours clearing and maintaining trails at Rasar State Park near Concrete and so they were well equiped; it took them just a couple of days.  The Deception Pass Park Foundation provided funding for the project. Metalwork was donated by Don’s Welding of Oak Harbor. 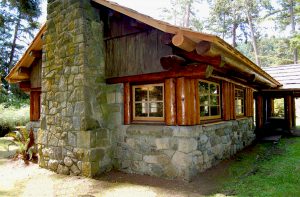 One of two large Civilian Conservation Corps-built picnic shelters at Bowman Bay, the “Upper CCC Shelter” is a unique and widely used structure in the park. It has a design that is different from all of the other shelters at the park, with the stove in the middle of the long axis and entrances on both sides.

The shelter was in poor to fair condition and needed significant work to be properly protected for the future. With limited state resources available for historic preservation, the shelter has not been well cared for during recent decades.

The Foundation funded over $15,000 worth of projects to help restore the shelter to its original 1935 condition. This was the largest project that the Foundation had taken on to date. We partnered with the Whidbey Island Retired Chief Petty Officer’s Association (RCPOA) to strip and refinish all of the shelter’s exterior wood in March of 2013. We also paid for professional repointing and patching on the shelter’s stoves and two chimneys. In July of 2013, VAQ-131 removed the old roof from the shelter in preparation for a new roof installed by parks staff in the fall of 2013. The new cedar shake roof will last several more decades. 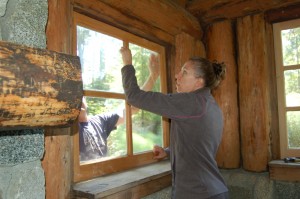 On President’s Day weekend 2014, VAQ-138 CPOs, VP-40 CPOs and First Class Petty Officers came out to strip the shelter and prepare it for staining. The group did a wonderful job and completed the project in one day.

Early in August 2014, Lex Palmer and a small group of volunteers with HDR, Inc. installed new glass windows to replace the cloudy Plexiglas windows. Deception Pass Park Foundation volunteers did the glazing on the windows.

We would like to thank the following businesses and organizations that have made significant contributions to the restoration of the Upper CCC Shelter: 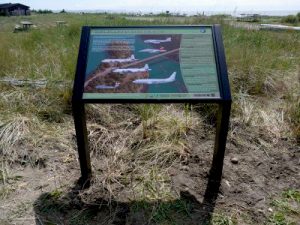 Any regular visitor to Deception Pass State Park knows that low flying aircraft from the Whidbey Island Naval Air Station are a fact of life here. Their main runways are a mere 3 miles from the park and often there are dozens of flights in a single day as pilots train for upcoming deployments. If you’re not used to it, the sounds can be startling.

Park staff get a lot of comments, questions and sometimes complaints about the Navy planes that fly over the park from non-local visitors who aren’t aware of this element of northern Whidbey Island. We thought that this represented a great opportunity for public education both about the presence of the Navy in Oak Harbor and the purposes of the aircraft they fly.

Our 2012-13 AmeriCorps member, Sam Wotipka designed an interpretive panel featuring lithograph artwork of the aircraft that are most commonly seen from the park. He received assistance from LTJG, Erin Litzen, of NASWI. The fabrication and installation of the sign were jointly funded by the Deception Pass Park Foundation, the Navy League of Oak Harbor and the Washington State Parks and Recreation Commission.

Thousands of visitors come to the Cornet Bay Retreat Center each spring and summer. Few of them realize that they are staying on the same grounds as the young men of the Civilian Conservations Corps (CCC) that developed Deception Pass State Park during the 1930s.

Sam Wotipka, the 2012-13 AmeriCorp Interpreter, and local photographer and park volunteer, Vince Streano, created an exhibit of CCC photos that highlights the work of Deception Pass Corps members at the modern-day grounds of the Retreat Center. Every photograph in the exhibit was taken at Cornet Bay and most of them are remarkably recognizeable even now–little has changed at the Retreat Center over the past 80 years.

The Foundation funded the printing, framing and mounting of the photographs in the Retreat Center’s Recreation Hall. It is our hope that this exhibit will further our efforts to help visitors appreciate and learn from the hard work, perseverance and dedication of the CCC members who served at Deception Pass.

Bench Construction at the Amphitheater-2012

Thanks to the hard work of Eagle Scout Nathan Wagner and his troop, the generosity of Frontier Building Supply, and support from the Deception Pass Park Foundation, the 1st half of our amphitheater renovations have been completed!  Nathan recently finished construction of 34 brand new benches–enough to fit over 250 people.  In 2012, on Memorial Day Weekend, nearly 230 people showed up for the first show of the summer season

Goose Rock is the highest point on Whidbey Island and one of the most popular hikes in the park.  At the summit, visitors are treated to spectacular views of the surrounding area and a chance to see a rare ecosystem: rocky balds.  Over thousands of years, a thin layer of soil has built up and created a meadow.  This is one of the best places in the park to find wild flowers.

The Foundation funded the production of interpretive signs to help visitors understand and protect this unique and fragile ecosystem.