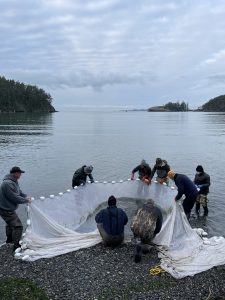 On December 3rd, 2021, the Northwest Straits Foundation (NWSF), Skagit County Marine Resources Committee (MRC) and their many dedicated volunteers wrapped up six years of beach seining as part of the Bowman Bay Restoration Project. After completing their final survey, the NWSF hosted a celebratory lunch at the ADA Picnic Shelter providing grilled salmon burgers, sides, some of the volunteers’ favorite donuts 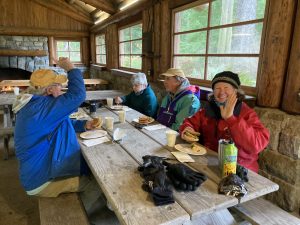 and cookies, hot coffee, and sharing of stories next to a warm fire.
The beach seining which has been conducted year-round since 2015 (minus the cancellation of 2020 surveys) is one of several surveys conducted each year to monitor and evaluate the effectiveness of the Bowman Bay Restoration Project. The project, completed in fall 2015, restored 540 linear feet of shoreline and 0.60 acres of nearshore habitat improving conditions for juvenile salmon migration and forage fish beach spawning. Other surveys completed include forage fish spawning, large woody debris and beach wrack accumulation, insect prey for migrating salmon, sediment composition, and beach elevation. These surveys allow us to monitor changes in habitat and habitat usage over time and make exciting discoveries like surf smelt spawning found on the restored beach!
The restoration project is the result of several partners working together including the NWSF, Skagit MRC, Washington State Parks, Skagit Fisheries Enhancement Group, Salish Sea Stewards, Samish Indian Nation, University of Washington, and Washington Department of Fish and Wildlife. All of the monitoring completed for this project would not have been possible without the dedication of our volunteers. Since the first forage fish survey was conducted in summer 2014, a total of 107 volunteers have provided 2,543 hours of service. Those same volunteers who conducted the very first survey in 2014 have been with us ever since, including participating in our December survey and attending the celebration afterwards!
Now that the beach seine surveys are complete, the NWSF is working to analyze the data to be included in a comprehensive report scheduled for distribution in March 2022. The report will be publicly available and presentations will be provided sharing the results.
While this is the conclusion of the planned one year pre-construction and five years post-constructions monitoring, dependent upon funding we hope to return for years nine and ten to further evaluate the long term project results.