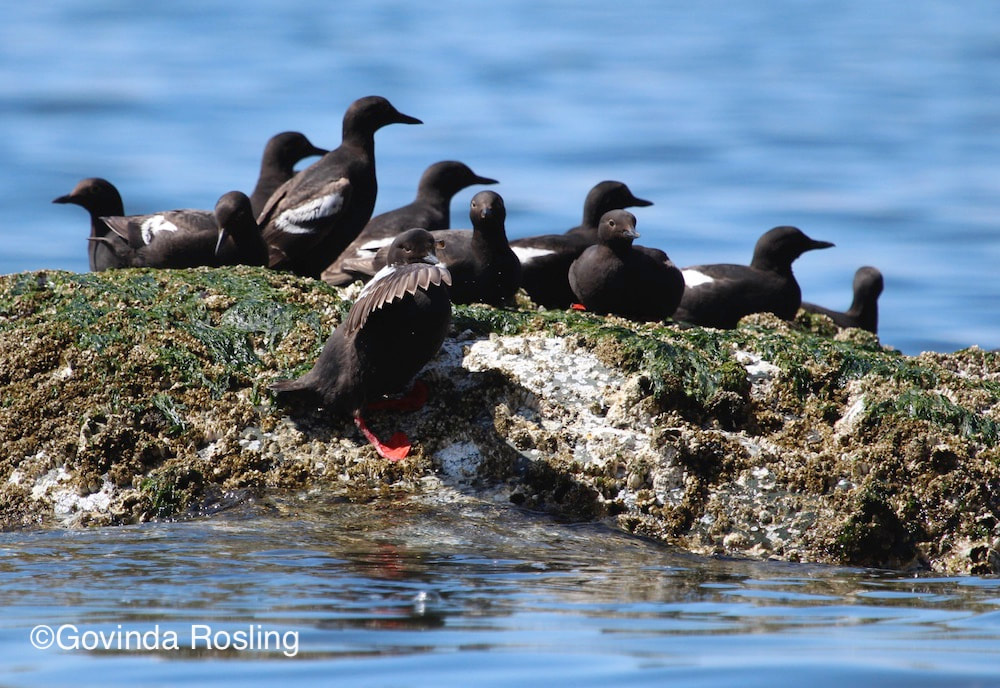 Tucked in the northwest corner of the iconic Coupeville Wharf this summer was my own little world. Once a week, starting in mid June, in the early morning, I made my way from Oak Harbor to the sleepy little wharf. As a citizen science volunteer with the Salish Sea Guillemot Network and the Whidbey Audubon Society, protocol dictated I had to begin my weekly survey before 8 am to catch the pigeon guillemots at their most active time of the day. For someone who normally doesn’t roll out of bed before 9 am this was a challenge. However, this night owl got the opportunity to share in a magical time with these diurnal birds.

The pigeon guillemot (PIGU), a medium sized auk or alcid (similar to puffins), is a beautiful bird this time of year. It spends about half of its life offshore in non-breeding plumage, living and feeding in open waters. But around April it returns to our waters, back to its natal breeding grounds, and begins re-establishing its pair bonds. It begins to sport a striking black breeding plumage with a white patch on the upper wing. What really sets it apart are the brilliant red feet, red inner mouth lining and distinctive calls heard often in the summer around bluffs and other places where they claim their breeding burrows.

They are only one of five alcids that breed in Washington State. However, pigeon guillemots are the only species to breed in the interior of the Salish Sea. This makes them particularly interesting to researchers as an indicator species for the overall health of this unique ecosystem we call home. That’s why The Salish Sea Guillemot Network was founded. It has been in operation and growing since 2002. Founded by Frances Wood and Dr. Phyllis Kind right here on Whidbey Island, the survey now reaches as far as the South Sound and into the Olympic Peninsula as well.

The premise of that survey is to recruit volunteers to perform weekly surveys of established breeding colonies in the Salish Sea. Since the pigeon guillemot utilizes both coastal bluffs and marine ecosystems, their breeding success can be a harbinger of things to come. As volunteers, we monitor their numbers, map active burrows, count deliveries to their burrows and record the type of prey delivered. Interestingly, during the breeding season, pigeon guillemots primarily feed themselves and their young with benthic fish such as gunnels and sculpins and their breeding success is tied to a healthy subtidal marine environment that provides enough prey for their growing families. After incubating their eggs for about a month, (they usually lay 2 eggs), we watch them deliver their prey to their babies for about 35 days. At that time, usually under the cover of darkness, the fledglings take a big leap from their bluff burrows and head out to the sea.

As this was my second year participating in this survey, I was familiar with the premise and the protocols, but so many things had changed for me and us as a group. First, we could not meet as a group as we normally did prior to the season to discuss changes to the protocols and education of new volunteers — enter Zoom and pre-recorded videos by the Salish Sea Guillemot Network —  to ensure we were all up to date on the newest information and protocol changes. As a volunteer, I am grateful this team was able to modify and adapt to this new way of education as I am fully aware of the challenges it brings. Second, and due to the COVID-19 pandemic, I was unable to participate in my originally prescribed colony on the naval base since I am not a former/active military personnel. Therefore, I was reassigned to my new monitoring “home” at Coupeville Wharf. Albeit a bit further from my home in Oak Harbor, it was indeed a magical place. Being the single surveyor of this site due to its smaller size, it offered me time for introspection along with data collection. As COVID-19 had taken hold of many aspects of mine and other’s lives, this opportunity offered a time and place to just be still.

Time slowed for just a brief period and I was able to watch life unfold as it happened in the broader ecosystem. I was able to observe harbor seals, schools of forage fish, patient herons, sea stars clinging to the edge of the wharf, feisty kingfishers, awe inspiring bald eagles and of course, my beloved PIGUs. These little birds have no timeline other than survival and raising their babies. I am so lucky to be able to witness just a sliver of all of their lives.      In this exceptional year, I have come to view my little colony as a lifeline to sanity. This weekly ritual had become a balm to a heavy heart and a worried mind.

Citizen science has been a challenge this year for all involved. In the beginning of the pandemic, it seemed as if all opportunities would be on hold for the year. But much like our little pigeon guillemot friends, we adapted. Gone are the days of being huddled close to review prey cards and protocols. Instead we learned to bond over new mask designs and hand sanitizer recommendations. However, the birds remained steadfast in all of their antics. Like the day while subbing at the Fort Casey colony in a dense fog, a PIGU dropped a sculpin almost into the laps of two of the volunteers to the south of my partner and me. We all giggled at this surprise and hypothesized on what made it drop the delivery. Or the day I discovered that the PIGUs had made a “burrow” on a derelict sailboat on its port side in Penn Cove. The laughs, surprises, and joys still continued. Their evolution to a changing world inspires and captivates the imagination particularly in such a challenging human moment such as this. 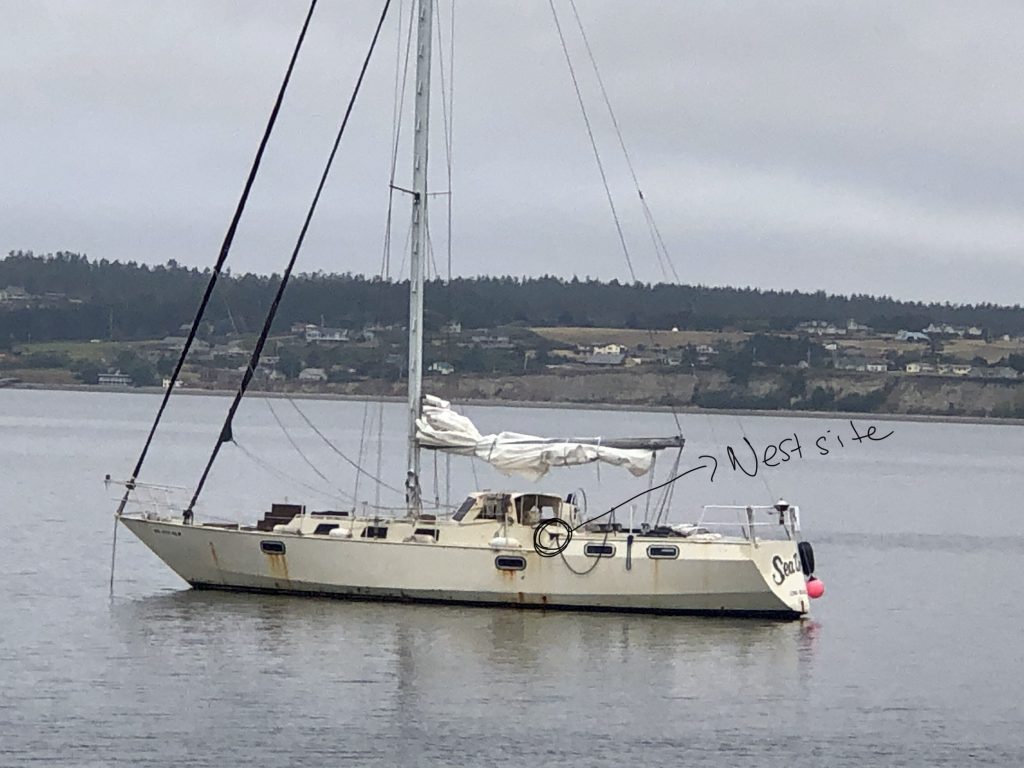 It is truly amazing what can happen if you just sit and observe the world around you for just an hour. I cannot recommend highly enough the practice of sitting and observing the world around you for a brief period of time. The discoveries you make both externally and internally, will be life changing. May you find calm and refuge in our home, the Salish Sea. And if you should happen to see or hear the distinct cry of a pigeon guillemot, wish it well on its journey as it follows the rhythms of life that govern us all.

To see and hear more, click here, and here