Fall Color for Your Feet 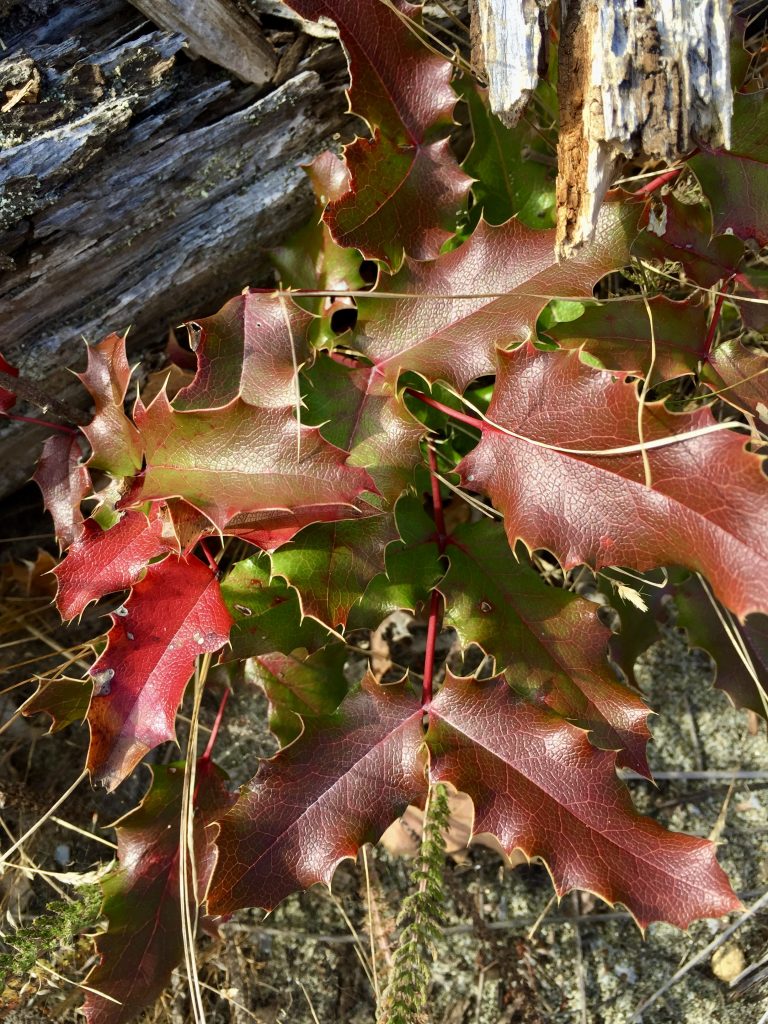 Marlene Finley is a retired US Forest Service and National Park Service Ranger living in Anacortes.

This time of year, we often look up to marvel at the changing colors of the season; the golden glow of changing leaves in the tree canopy, but have you noticed the gorgeous colors that line the trailside? Have you witnessed nature’s colorful expressions on the forest floor?

One of the beauties that caught my eye this week was Oregon-grape, Mahonia sp. Oregon-grape plants turn a rich red and even shades of burgundy and maroon as the holly-like leaves lose their chlorophyll.

This native plant looks like spikey English holly but is distinguished by opposite leaflets in its compound leaves. There are three local species of Oregon-grape, including Low Oregon Grape, Mahonia nervosa and Tall Oregon-grape, Mahonia aquifolium. A member of the Barberry Family, Berberidaceae, some argue that the genus, Berberis is more appropriate for this plant. Even so, horticulturists have consistently continued to use the genus Mahonia to refer to those species with compound leaves that give them a very different appearance from barberries. The Burke Museum Herbarium in Seattle houses a specimen of Mahonia nervosa collected at Deception Pass State Park in 1936.

Low Oregon-grape and Tall Oregon-grape can be found from southern British Columbia to Northern California, mostly west of the Cascade and Sierra Mountains; but they also occur in northeastern Oregon and Washington and the Idaho panhandle. Oregon- grape grows in dry to fairly moist soils, open to closed forests at low to middle elevations. I found the plant in the photograph growing in the open, sandy soil of the rear dunes.

Mahonia sp. has bright yellow flowers in the spring and bitter blue berries in the fall. The berries are edible, though not in quantities. Some people make jelly from the berries, mixing the Oregon-grape berries with other juices and berries. The plant has also been known to be browsed by deer and Roosevelt Elk. The nectar of the flower is favored by Anna’s hummingbird.

The leaves change color as temperatures cool and days become shorter. The chemistry in the leaves change as the plant produces less chlorophyll (hence less green) and other chemicals such as anthocyanins in the leaves absorb the blue, blue-green and green color and reflect the reds and burgundy colors.

Tip for the day: The brightest autumn colors are produced when dry, sunny days are followed by cool, dry nights because these conditions favor the amazing chemistry occurring within each leaf.