Home » News » Forest Bathing-Just Do It!

For most people in the modern world, nature has become anything but natural. Millions of people spend their days locked to screens large and small, inside buildings or vehicles that keep us separated from shrubs, flowers and trees. The greening of interiors has arisen as a way to provide an infusion of nature without decreasing productivity. But the only real remedy for our innate need for nature is nature itself.

Spending any amount of time in the natural world is a benefit. But slower and more absorptive contact with nature has shown to have increased benefits. In Japanese, the term “shinrin yoku” is used to describe this meditative experience in the natural world. Translated as “forest bathing”, shinrin yoku can involve interacting with water, but doesn’t literally involve physically bathing in a tub, or even a forest stream. The immersion is of the senses, possibly in actual water, but also in the soil, air, sunlight and sound that we often ignore.

This practice of deeply appreciating the details of nature fits perfectly into Japanese culture, which is underscored by the animist philosophies of Shinto. But while events like cherry-blossom viewing, or Hanami, have been a national pastime for centuries, don’t go looking for references to first bathing in the Tale of Genji or any other ancient texts. The term was coined in 1982 bye Tomohide Akiyama, then minister of the Japanese Forestry Agency, as part of a campaign to make citizens less sedentary and more appreciative of the environment, especially Japan’s forests.

Back then, excessive work hours and the infatuation with the Walkman were the biggest issues, and the evidence that getting outdoors is important was largely anecdotal. In the decades since, both our attachment to devices and the proof that we need time away from the have increased exponentially. Forest bathing and forest therapy programs exist across the globe, and new research continually highlights the benefits of absorbing nature.

Yoshifumi Miyazaki, a professor at Chiba University near Tokyo, was one of the first to study the effects of forest therapy. Beginning in 1990 he focused on the impact of nature on health. “People have less contact with nature than before,”he says, “and it seems that they are more stressed than ever.” Highlighting the fact that getting to nature is not always easy” Miyazaki adds, “it’s great to go to the forest, but you might only be able to do that once a month or once a year. The next option is to go to the park or use your garden.”

This sentiment is echoed by Amos Clifford, Founder of and Executive Director for the Association of Nature and Forest Therapy (ANFT) in Santa Rosa, California, who ties Japanese culture into the ANFT’s practice by saying the ideal place for it is in the satoyama zone. Represented in Japanese by the character of a person standing in a field (sat) and the iconic, three-pronged character for mountain (yama), satoyama is the area just beyond the edge of the village, a traditional place for Shinto shrines. A thin band where the human and natural worlds merge before deep wilderness begins, Clifford describes it as “territory that is almost familiar but beyond the boundaries of ordinary experience.”

When it comes to forest therapy, this territory doesn’t necessarily have to be at the fringes of the built world: essentially any nature that’s close at hand will work. And that’s good news, since few of us have the time to get break away on a deep wilderness trek on a regular basis. Simply slowing down to appreciate a well-known trail, park, or even an individual tree in a new way can reduce stress and boost positive brain activity. The key is to take notice and, as T. S. Eliot once wrote,”know the place for the first time”. 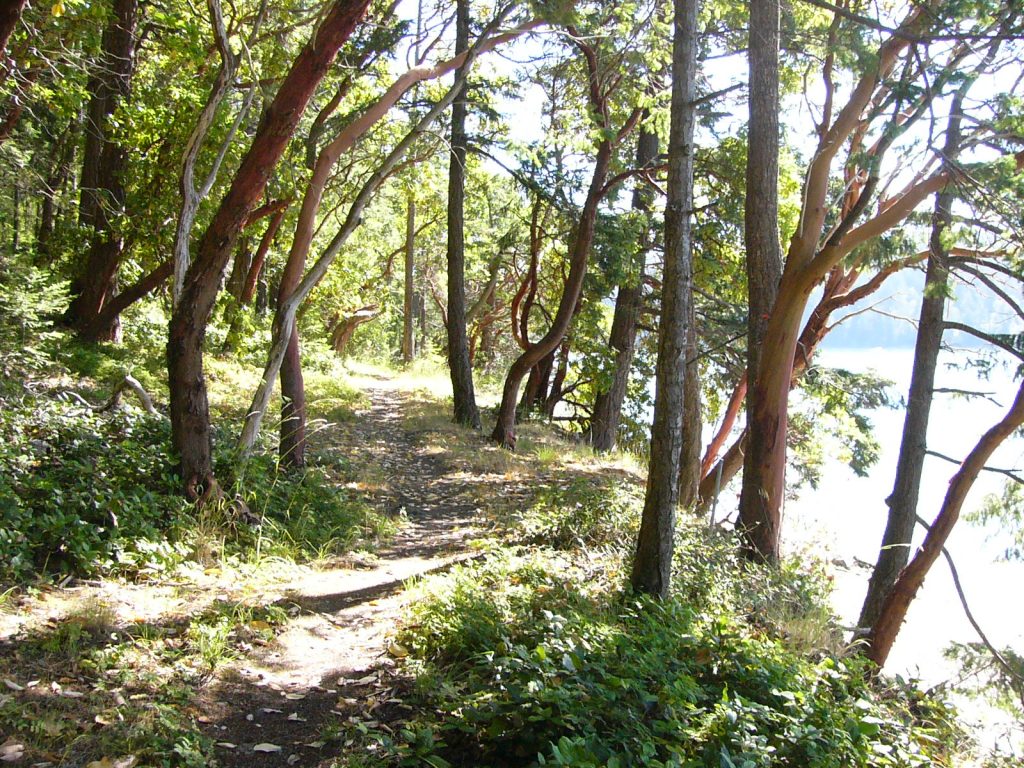 As might be expected, forest bathing primarily involves a person’s specific and individual connection to nature. But that doesn’t mean you have to go it alone. ANFT has world-wide networks of guides listed on their website, all of whom have been certified through their practicum, the only American-based training program in existence. Guides help unlock new perspectives and going in a group can allow people to share how the different experiences felt to them.

Whether you choose to get out into nature in a group or alone, though, isn’t nearly as important as it is to simply get there. And what matters most is that you make a point of unplugging from technology and tapping into nature at least twice a week for twenty minutes or more.

Jamie Trost has been a tall ship sailor and captain for nearly two decades and taught English in the rural farming town of Bisei-Cho for two years. In 2017 he served as interpreter and guide for the leadership of ANFT on an 18 day expiration of Japan’s Health and Therapy Forests. He has studied Urban and environmental Planning at the University of Virginia