Good News From the Tide Pools

By Dr. David Cowles and Class

In the summer of 2020 the Rosario Beach Marine Laboratory Marine Invertebrates class studied the intertidal community of Urchin Rocks (UR), part of Deception Pass State Park. The intertidal zone at Urchin Rocks is mainly bedrock, is easily reached, and is a very popular place for visitors to enjoy seeing the intertidal life. Visits to the Location have become so intense that Deception Pass State Park has established a walking trail and docent guides in the area in order to minimize trampling of the marine life while still allowing visitors. 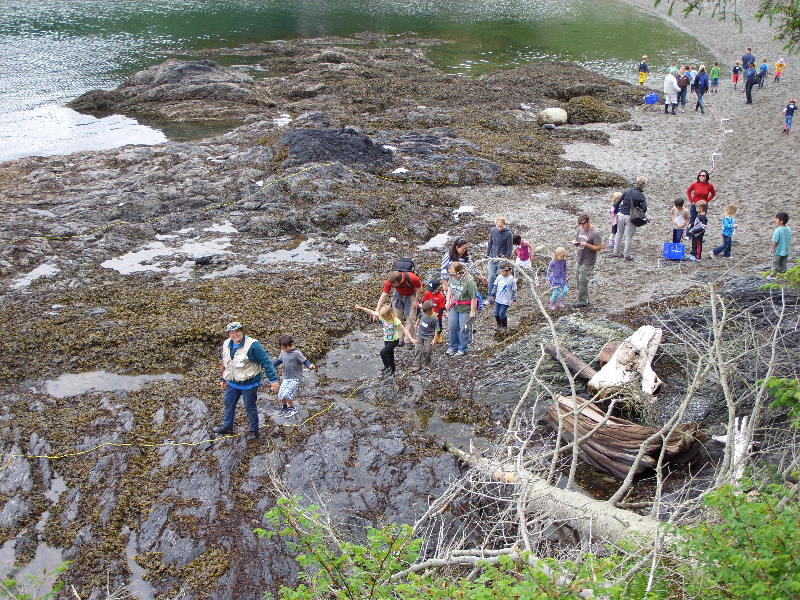 No documentation exists for the state of the marine community before visits became common, but an analogous Location with similar substrate exists just offshore on Northwest Island (NWI). Using a belt transect divided into 1 m2 quadrats, the class quantified the algae, barnacle, and other invertebrate components of the communities at the two locations and compared them. Algal cover at both sites increased at lower tide levels but while the cover consisted of macroalgae at NWI, at Urchin Rocks the lower intertidal algae were dominated by diatom mats instead. Barnacles were abundant at both sites but at Urchin Rocks they were even more abundant but mostly of the smallest size classes. Small barnacles were especially abundant at Urchin Rocks near where the walking trail crosses the transect. Barnacles may be benefitting from areas cleared of macroalgae by trampling but in turn not be able to grow to large size at Urchin Rocks. Other invertebrates commonly found on the transects included Anthopleura elegantissima anemones, limpets, chitons, amphipods, and isopods at both Locations. Mytilus trossulus mussels, predatory Nucella snails, and larger anemone species were only found at NWI. The lack of Nucella spp. At UR may also explain the abundant barnacles there because small barnacles are one of their main prey items. Seastars were present at both locations but lower down and less abundant at UR. Species richness was 45 at NWI and 31 at UR. Overall, these results are similar to those of a similar study 18 years ago in 2002 and suggest that even though the marine community at UR shows likely impacts of human use the Location does not appear to be becoming more degraded and maintains a moderate level of diversity. The most obvious difference between the Locations is the heavy diatom mat at low intertidal levels. This mat is persisting but it is not clear whether it is due to human trampling or some other cause.

To read the report: