The Harbor Porpoises in Your Backyard

Home » News » The Harbor Porpoises in Your Backyard 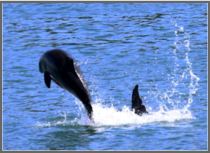 A dorsal fin rolls at the surface in Burrow’s Bay – it’s a whale, a dolphin, no- it’s a porpoise! Wait… what’s a porpoise? The term dolphin and porpoise are often used interchangeably, but they are different. Porpoises are smaller, stockier, and less active at the surface compared to their dolphin cousins. If you saw a small dark shape at the surface in your local waters, then it was most likely a harbor porpoise, one of the most common marine mammals in the Salish Sea. They are described as cryptic, shy, and evasive, and if you have ever tried taking pictures of them, then I am sure you can agree that these are frustratingly accurate descriptions.
At 135-170 pounds and 5-5.5 feet, harbor porpoises are the world’s second-smallest cetacean (the group including whales, dolphins, and porpoises). Unlike many dolphin species, harbor porpoises are found in relatively small groups of 3 or less and won’t be found bow-riding or approaching boats. They are like the cats of the ocean, a bit more aloof and perfectly fine hanging out by themselves. Despite their loner status, cats can certainly be interesting, and the same is true for harbor porpoises.
They have a nickname! Because of their short, stocky size and loud breaths at the surface, they are known as “Puffing Pigs.” This name also fits because they need to eat – a lot! They mainly feed on small fish like herring and anchovy but have been known to eat adult salmon and Shad. Perhaps sometimes their eyes are too big for their stomach! But they have a very high metabolism and can starve in as little as three days, so every meal, small or large, is essential.
They are also said to ‘live life in the fast lane’ with a lifespan estimated between 8-24 years. They live at least half as long as most dolphin species, which means they have to start having babies earlier. They will have their first calves around 3-4 years old and can have a calf every year or every other year. This often means that a female will be pregnant or lactating for her entire adult life-That sounds exhausting! Another fun fact! If you have seen a harbor porpoise leap out of the water, it was likely a male that was attempting to mate with a female – they always approach on the female’s left side, sometimes with quite a flourish!
Did you know that we can identify individuals? Through photo-identification (photo-ID) of their pigmentation, scarring, and dorsal fin characteristics, we know more than 80 individuals that use Burrows Pass. We know that harbor porpoises are present here year-round (but less in summer), calves are first seen in late summer/early fall, and they come here to eat, play ……….. (we see them wake ride sometimes!) and mate. Burrow’s Pass provides a unique observation point, where we can learn about their daily lives.
We have learned a lot in the last few years, but there is still so much to learn about this understudied and underappreciated species. So the next time you see harbor porpoises, take a moment to admire them, knowing there is much more to these small, mysterious animals than meets the eye.

050218A_porpoise mating_Burrows_1889CE: Male harbor porpoises always approach the female’s left side and sometimes leap out of the water during a mating attempt.
Location: Burrows Pass

081916C_porpoise in wake sequence 2_Burrows_3162CE_escropped: Harbor porpoises may not bow-ride, but they will occasionally wake-ride once the boat has passed through. Location: Burrows Pass.

For more information, including the new online giftshop! https://pacmam.org/wp/

Previous Post: « Good News From the Tide Pools
Next Post: Citizen science and connection to the natural world in the age of COVID-19 »