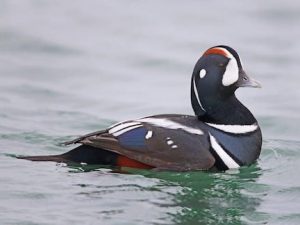 By Jeff Sinker
Reprinted with permission from
Skagit Audubon Society

Male Harlequin ducks are unmistakable in their stunning blue/chestnut/white breeding plumage and look as though they are dressed for a masquerade ball. These small ducks are never found far from turbulent waters, both winter and summer, and x-rays performed on adults have revealed these ducks sustain multiple broken bones that have healed during their lives.

In winter, they congregate on exposed, often rocky, coastlines where they often form large groups. Harlequins are diver ducks who can propel themselves underwater as deep as 70 feet and for as long as 45 seconds. Favorite prey items include: small fish, barnacles, fish eggs, crabs, insects (especially during breeding season), and similar foods.

Harlequin ducks form monogamous pair bonds that last for the long term. When traveling to their breeding grounds on fast rushing rivers, they follow the path of the river rather than flying overland. If you’ve been out hiking along a turbulent river and seen a pair of small ducks zipping up the river, most likely you’ve seen a breeding pair of Harlequins.

After the pair arrives on the breeding grounds, the female inspects possible nest sites, which might take her an hour or more per site. She will use downy feathers, mosses, soft plant materials and perhaps small stones to construct the nest. Nests can be located on the ground, on cliff ledges, or in tree cavities. Only the female incubates the 4-6 eggs she lays, and once incubation begins, the males depart for the wintering grounds. After the chicks hatch, the female moves the family to slower-moving water with an abundant supply of insects for the chicks to eat since the chicks are not able to dive until they are 3-4 weeks old.