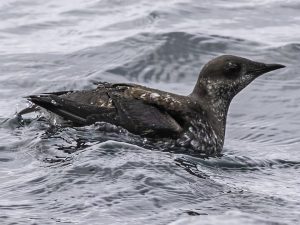 A small chunky seabird, who is as much at home in the canopy of an old-growth forest raising its single chick as it is feeding on favorite forage fish like Pacific herring in marine waters perhaps 45 miles away from the nest, gets its name from the overall brownish “marbled” breeding plumage. Outside breeding season, these uncommon year-round residents are sporting mostly black-and-white plumage. Marbled murrelets are members of the Auk (Alcidae) family and can “fly” underwater using their wings as they dive and pursue their prey. Rocky coastlines and upwelling waters where currents congregate zooplankton, small shrimp, and herring are good places to look for these birds. They are the only North American auk to nest in trees and they also roost in trees year-round.

First named in 1789, the first nest wasn’t discovered until 1974. Sadly, during the 1950s-1960s, loggers in British Columbia had reported finding adults, juveniles, chicks, and eggs in fallen old-growth trees. This prompted scientists to begin looking for nests, but success wouldn’t happen for two more decades. Courtship begins in winter and continues into summer when pair bonding is completed. They do not nest in colonies, but it is likely that several pairs nest within the same territory where suitable habitat exists.

Marbled murrelets select large flat branches in the upper canopy of old-growth forests where epiphytic moss covers the tree limbs of Sitka spruce, coast redwood, Douglas-fir, Western Red Cedar, and similar species. A single egg is laid and incubated for 30 days in alternating shifts by both parents. The downy chick is fed at dawn and dusk and then fledges and flies by itself to the water about 28 days after hatching

Marbled murrelets are naturally low reproductive birds who do not lay eggs each year. Vulnerable on the water to oil spills, harmful algae blooms, gill nets, prey availability, and in the old-growth forest to logging, human-induced fires, land conversion, and habitat fragmentation, they are listed as Endangered in Washington and Threatened under the Federal Endangered Species Act. The Olympic Peninsula, northern Puget Sound, and the North Cascades support the highest number of breeding sites. Decades ago, marbled murrelets were not long-distance commuters between their feeding and nesting sites because old-growth forests extended to the coastlines. Developing conservation management plans is challenging and habitat fragmentation increases nest predation of eggs and chicks by owls, hawks, falcons, jays, and crows. The effects of climate change on both their marine and forest environments are another threat to overcome. Locally, marbled murrelets can be seen along the rocky coastlines of Deception Pass State Park and Washington Park in Anacortes.