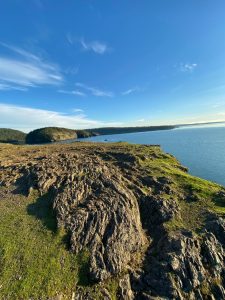 The unusual stone outcroppings at Rosario Head catch the attention of geologists and non-geologists alike. The striking, crumpled texture, comparable to scrunched up fabric, inspired this to be called “ribbon chert.” Where did ribbon chert come from, and how did it come to be shaped like that?

This stone is composed of the remains of Radiolaria, a kind of miniscule plankton. Like many land insects we are familiar with, instead of bones on the inside, Radiolaria have an outer shell called an exoskeleton. This exoskeleton is made of silica, a common mineral ingredient in sand. Long ago, their bodies drifted down to the ocean floor, and over time generations of piled exoskeletons have settled into stone.
Radiolaria are known for their intricately shaped skeletons and their rapid evolution.

On the right, you can see just a few of these skeletons, drawn by Ernst Haeckel in 1904. Since each unique appearance is only found during a specific time period, this makes their remains ideal for 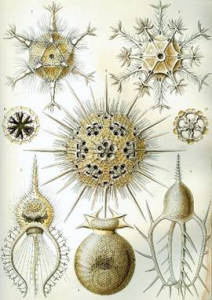 scientists to determine the age of rocks they are found in. We know that the Radiolaria now entombed at Rosario Head lived their tiny little lives about 150 million years ago, during the Jurassic period, when dinosaurs walked the earth.

The crumpled “ribbon” shape is due to these rocks being distorted by years of movement of Earth’s tectonic plates. Rock is not always as solid as it seems, and under immense pressure, it can bend and twist just like playdough. Imagine now that our playdough has been sliced up, wiggled around, and mushed about, creating what we see today.

Take a stop by Rosario Head to see for yourself. While you are out there, you may also enjoy taking in the view of Rosario Bay, where, visible or not, modern plankton are still floating in the sea.