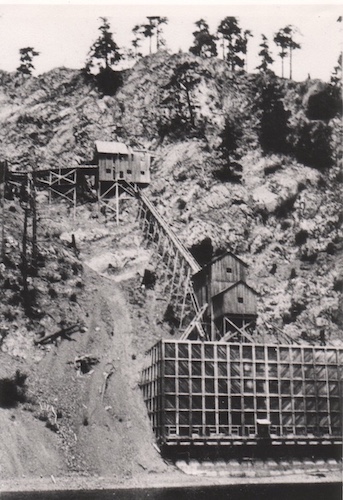 High on the cliff above the often turbulent tidal currents of Deception Pass there was once a rock quarry worked by convicts. It was located on the north side of the Pass on Fidalgo Island, approximately 1500 feet east of where the bridge is now. Officials in the state prison system, motivated by a desire to experiment with using convicts as laborers, let the contract for construction in 1909.

The quarry site was located around 200 feet above the water. Here contractors built a rock crusher and a bridge along the side of the cliff to connect the quarry to the crusher. A man made tunnel also connected the quarry site and the crusher. Below the crusher they built a chute and, along the water, a bunker. They also installed machinery to process the rock and tracks on the bridge for carts to carry rock to the crusher. The rock crusher was capable of breaking 600 tons of rocks a day. In February of 1911,  3327 cubic yards were crushed. After being sized, the rocks were slid down the slope through the chute into bins in the bunker at the water’s edge. A scow loader, a movable belt, carried the rock onto the scows. Tug boats towed the scows to locations where they were unloaded onto trucks which transported the rock to road building sites.

Some 2000 feet east of the quarry, contractors constructed a wharf, powerhouse, a concrete 25,000 gallon fuel storage tank, barracks, stockade and a guest house. In the powerhouse a generator driven by an oil fueled steam engine produced electricity which was transmitted to the barracks and quarry site. A water ram pumped water through a long pipe from Pass Lake for the steam engine, camp and quarry.

Convicts walked on a path to get to and from the quarry site. In late 1909 there were at least 25 convicts, in 1911 there were 48 convicts and five officers in the camp and by 1913, there were only six prisoners. The work had to be hard and exhausting. After the rock was blasted lose, convicts wielding sledgehammers broke the rock into smaller chunks light enough to be lifted or shoveled onto the carts. The hard work may have been the motivation for the frequent prisoner escapes although enforcement appears to not have been rigid as officers did not have guns or manacles visible. Quarry closures were frequent due to funding, and the length of convict assignment and sentence times. The state apparently stopped operating the quarry around 1913 but kept a caretaker there into 1914. It was dismantled in 1924.

One can still view the cliff side tunnel (aka cave) opening from the trail on the Whidbey Island side of Deception Pass or from a boat. The tunnel opening is located just east and at the top of the scree slope.  Note: There is nothing of interest to view at the site now since the tunnel was closed by steel bars in 2006 due to people falling, at least two fatally.