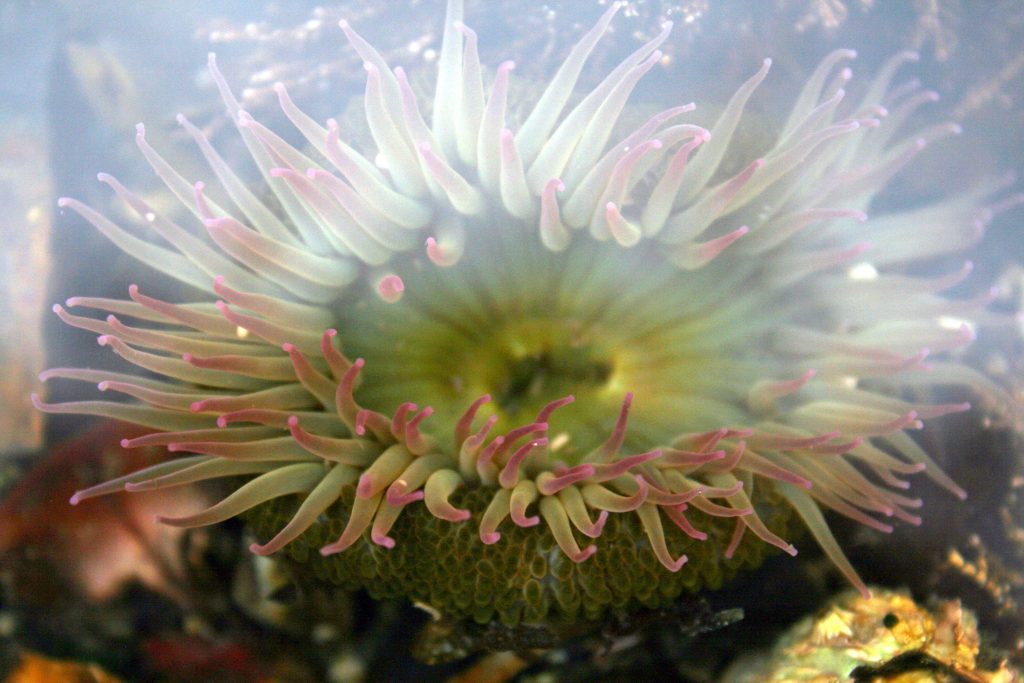 Sea anemones get a bad rap. Not only do they have to share their name (“anemos” is the Greek word for wind) with a flower species, compared to a translucent, pulsing jellyfish; a brightly colored, pincered crab; or an alien-like, squishy sea slug, they don’t seem very extraordinary.

Anemones, like all Cnidarians, have “tentacles with stinging nematocysts. The nematocysts act like tiny harpoons, reacting to stimuli by hurling out small stinging cells that both poison and hook potential prey. The thread attaching the stinging cell to the Cnidarian then retracts, drawing the victim back to the main body of the Cnidarian to be eaten or stung to death,” which doesn’t seem like a very good way to go if you ask me.

“The internal anatomy of anemones is very simple. There is a gastrovascular cavity, which functions as a stomach. This cavity has with a single opening to the outside, which functions as both a mouth and an anus: waste and undigested matter is excreted through the mouth/anus. A primitive nervous system, without centralization, coordinates the processes involved in maintaining homeostasis as well as biochemical and physical responses to various stimuli.” 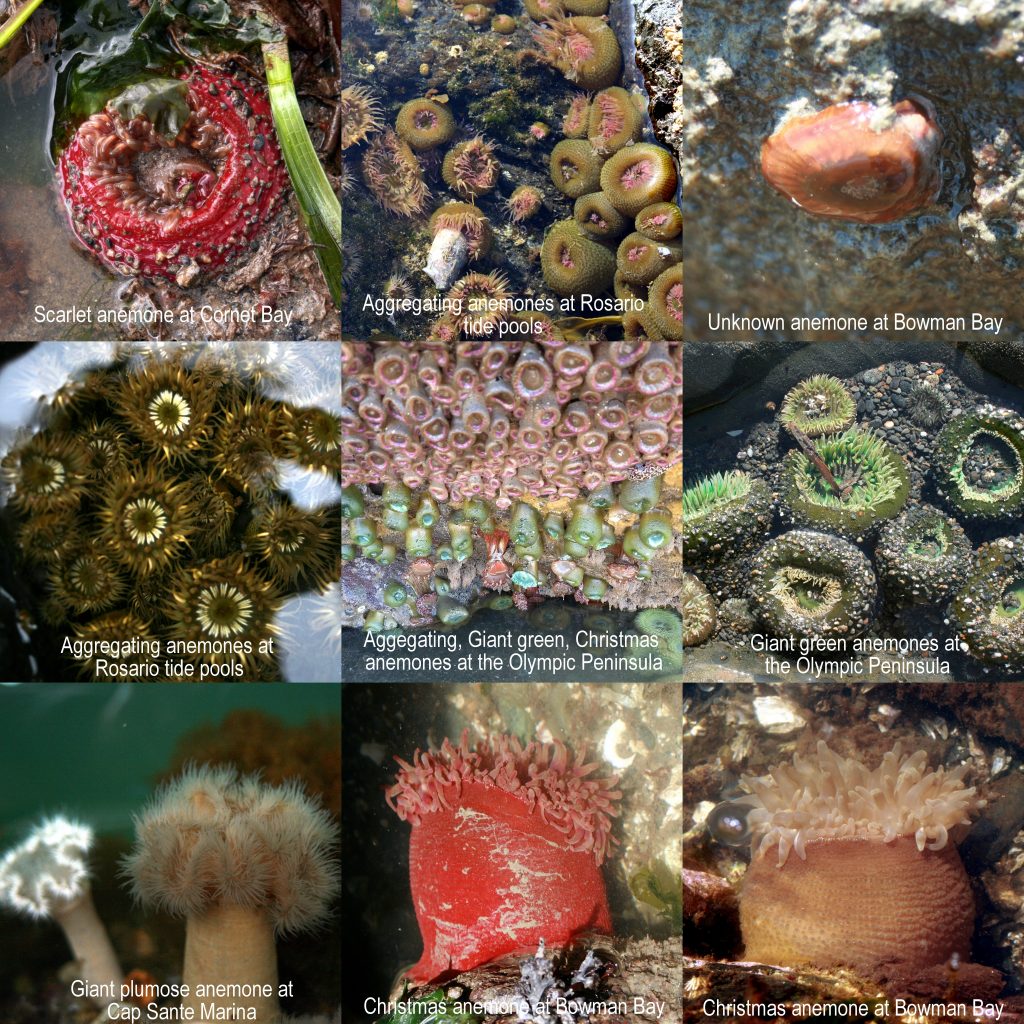 Most anemones are sessile, which means that they “can move via external forces (such as water currents), but are usually permanently attached to something.” This doesn’t prevent them from behaving in amazing ways. For example, Aggregating anemones (Anthopleura elegantissima), common to the tidepools at Rosario Beach in Deception Pass State Park (DPSP), aggressively defend their clan, which consists of clones. In the study Social Organization Within Clones of the Sea Anemone Anthopleura Elegantissima, researcher Dr. Lisbeth Francis refers to those that live along the border of an aggregation as “warriors,” and concludes that they, “have more and larger acrorhagi (specialized structures used in intraspecific aggression) than clonemates elsewhere in the aggregation,” “are smaller on an average than midclone anemones,” and “Each anemone responds to its particular circumstances, and in so doing may fortuitously benefit its clonemates.”

In my experience, of the approximately “1,000 species” worldwide, maybe a dozen can be observed, unsubmerged, during minus tides along the shores of Whidbey and Fidalgo Island. Among these, a relative of the ones with the warriors along the aggregate’s edges, is the Moonglow anemone (Anthopleura artemisia). With careful searching, you can find them at Ala Spit on Whidbey Island, “Normally only the tentacles and oral disk are exposed, with the rest of the anemone buried in the sediment.” The tentacles of these silver-dollar sized specimens that come in two colors, green and brown, appear iridescent in direct sunlight. During an encounter with one recently, I found something besides the creature’s column buried in the sand: a juvenile Dungeness crab (Metacarcinus magister). A few weeks later at Cornet Bay, I spied something similar: a partially exposed, juvenile Red rock crab (Cancer productus) resting comfortably under a Christmas anemone (Urticina crassicornis) that formed an awning over it. I asked Dr. Gregory Jensen, author and crab and shrimp researcher at the University of Washington what these sightings might mean, “Crabs frequently seem to use anemones for shelter like this, especially red rock crabs. Sharpnose crabs do it a lot too. I suspect it’s a pretty safe place to be in terms of avoiding predatory fish, but it does carry some risks-anemones do eat crabs.” Christmas anemones can be found locally at Deception Pass State Park’s Bowman Bay, Cornet Bay and Rosario Beach. 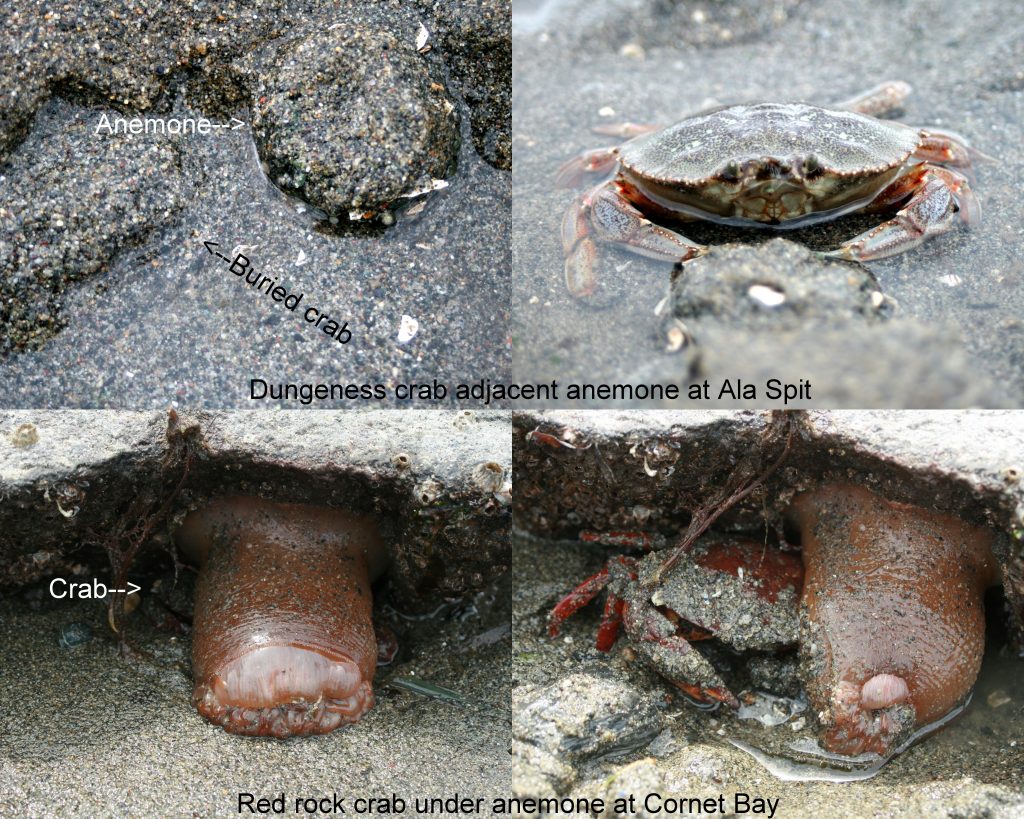 Like the Moonglow, the Scarlet anemone (Urticina coriacea) embeds itself in the sand, leaving only the oral disc (which contains a ring of tentacles and a central mouth) exposed to the surface, “Its oral disk and tentacles are a mix of red and greenish-gray.” The best place to find them is along the beach at Cornet Bay. At the nearby dock, I observed and photographed a Brooding anemone (Epiactis prolifera). Members of this smallish species are easy to distinguish from the all others because they are, “Commonly found externally brooding young of various sizes and year-round.” The miniscule juveniles, “Live on the mother’s column (digesting yolk, then catching prey) until at least 3 months old and 4 mm diameter, then crawl off.” A similar species, named after Dr. Lisbeth Francis, is Lisbeth’s brooding anemone (Epiactis lisbethae). They are as reclusive as the researcher herself. A distinguishing feature between the two is that the “dark lines on the column of Epiactis prolifera do not continue above the middle of the column” while in Epiactis lisbethae, they do.

Further afield, along the Olympic Peninsula, the Giant green anemone (Anthopleura xanthogrammica), “one of the largest species of anemone in the world,” is commonly seen. They “are vividly green if they are exposed to bright sunlight,” which can “be attributed to green pigment in the anemone epidermis and to symbiotic algae that live in the tissues that line the gut.” I’ve never seen this species locally. 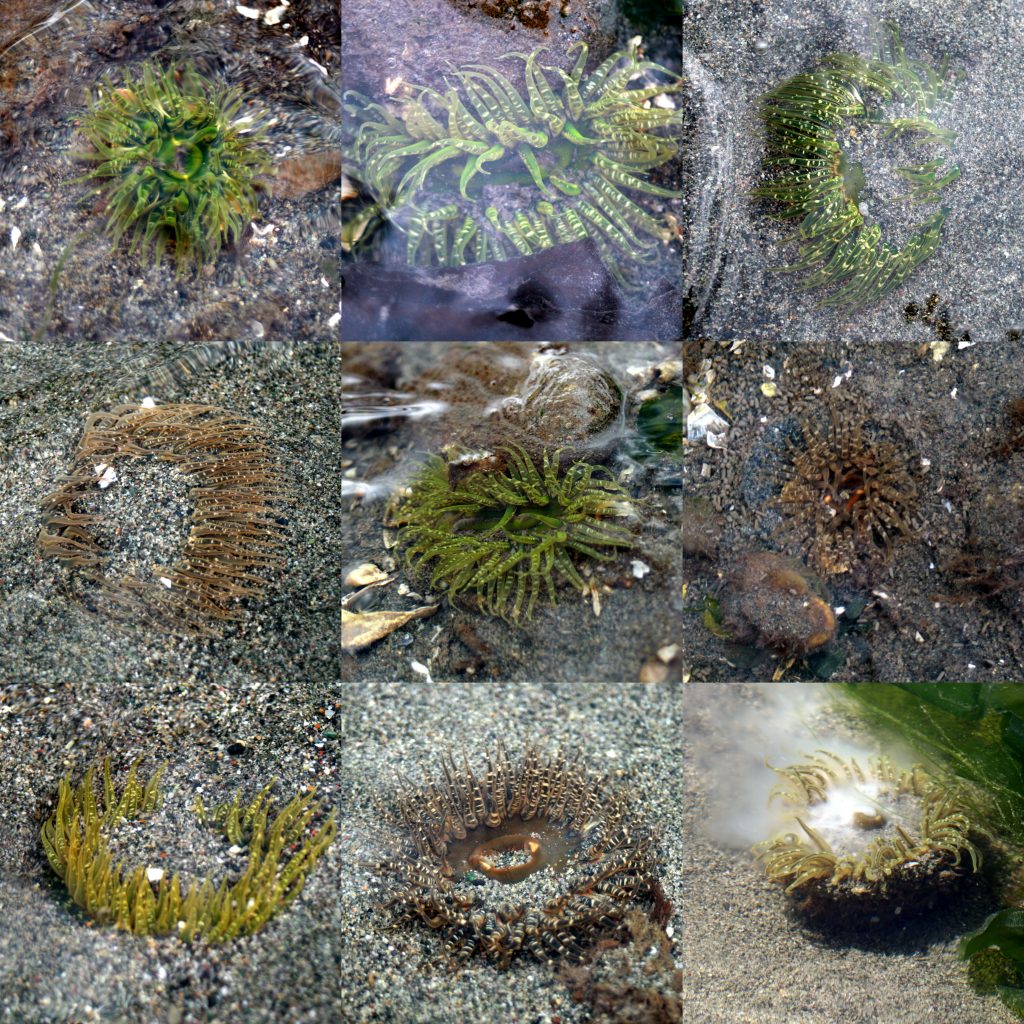 The denouement of my first sea creature-seeking mystery, which happened while beachcombing at Cornet Bay, involved anemones. I noticed dozens of squishy-looking lumps hanging from the underside of a massive driftwood log. Without tentacles to help identify the white, brown and maroon suspensions, I didn’t know that they were Plumose anemones (Metridium senile). Much like Dr. Lisbeth Francis’s Aggregating anemone warriors, “This species is often found aggregating together,” and if an individual detects a non-clone or an Aggregating anemone, it attacks, “[T]he tip of the tentacle breaks off and sticks to the victim….and the attacked individual may even die.” Its larger cousin, the Giant plumose anemone (Metridium farcimen), which comes in the same colors, is more of a solitary creature. “This species, which can be up to 1 m tall when extended, is said to be the world’s tallest polyp.” Another difference between the two is that, “The edges of the oral disk are prominently lobed.” Metridium farcimen are easy to find along the underside of the docks at Cap Sante Marina in Anacortes.

Before I learned about the behavior of anemones, I felt sorry for them for their stationary, seemingly ordinary existence, but it turns out that some “can move slowly by gliding on their base,” while others are “capable of moving rapidly…by detaching, catching a current and re-attaching elsewhere.” Besides what watching Finding Nemo had already taught me about the symbiotic relationship that some anemone species form with clownfish, I have since found out that they act in amazing ways, like as warriors that battle their enemies to the death. Finally, because some species can clone themselves, they “have the potential to live indefinitely in the absence of predators or disease.”