Sea slugs cast a spell on me…and it all began with fake news. Well, semi-fake. Okay, it was actually two photographs, and the one that cast the spell wasn’t exactly fake, but it wasn’t of “the” sea slug. It was a vibrantly-colored red-tipped, black and white version of the same sea slug species taken underwater in all its flowing cerata glory. The actual sea slug, fully exposed to the air because it hadn’t paid attention to the tides, was smallish, blobbish, and its orange-tipped cerata were all clumped together like a minuscule bowl of purple sauce spaghetti with shredded cheddar cheese on top.

When I learned that these small snail-relatives live in the Salish Sea, I went looking for them. I had no luck beach-combing at Bowman Bay last summer, but I didn’t give up. Months later, my perseverance paid off. I spotted my first one. Since then, I’ve observed about two dozen individuals of six different species in three places: Cornet Bay, Bowman Bay, and the Anacortes Marina.  My first encounter was my favorite:

I descend the narrow metal-grate walkway and step onto the weathered wood of the Cornet Bay dock on an early evening in September. Fishermen and women, poles strung with baitless multi-hook jigging rigs, mostly sit in camp chairs lined up along the north side, fling scoops of chum into the bay, catch silvery smelt and herring, pull them off tiny hooks and drop them into saltwater-filled buckets. My destination–two barnacle-encrusted, creosote-coated pilings that support the end of the pier, a common hangout of several crab species. I scan the perimeter of the pilings and the water’s surface. And I see it–a tiny, shiny, colorful creature about the size of my thumb with dozens of tentacle-y things (called cerata). It’s attached to a single blade of eelgrass among a mass of the several feet long stuff that grows from the silty sea floor. I know exactly what it is: Hermissenda crassicornis commonly known as the opalescent nudibranch, the same species seen at Bowman Bay.

For a few weeks after I saw my first sea slug, it seemed as if they simply appeared whenever I showed up. One might argue that they were there all the time and I had simply started paying proper attention, but I like to think that they heard me coming and crawled quickly in my direction, because of which, I christen myself the Nudibranch Whisperer of Deception Pass. Although I am prepared to defend my title, the next time you go beachcombing or tidepooling at Deception Pass State Park or elsewhere, I hope you will give nudibranch whispering a try. Check out Jan Kocian’s amazing underwater photos of nudibranchs, complete with interesting facts, for more information about these cool creatures. 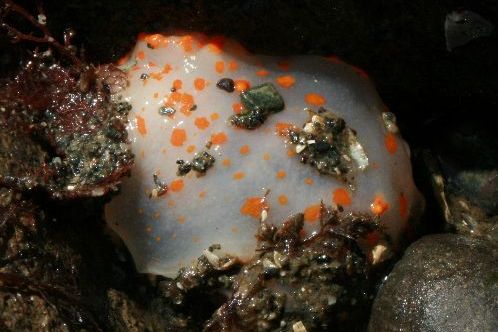 According to National Geographic, “The bottom-dwelling, jelly-bodied nudibranch (NEW-dih-bronk) might seem an unlikely canvas for Mother Nature to express her wildest indulgences of color and form. But these shell-less mollusks, part of the sea slug family, bear some of the most fascinating shapes, sumptuous hues, and intricate patterns of any animal…Their scientific name, Nudibranchia, means naked gills, and describes the feathery gills and horns that most wear on their backs…Generally oblong in shape, nudibranchs can be thick or flattened, long or short, ornately colored or drab to match their surroundings. They can grow as small as 0.25 inches or as large as 12 inches long…They are carnivores that slowly ply their range grazing on algae, sponges, anemones, corals, barnacles, and even other nudibranchs. To identify prey, they have two highly sensitive tentacles, called rhinophores, located on top of their heads… 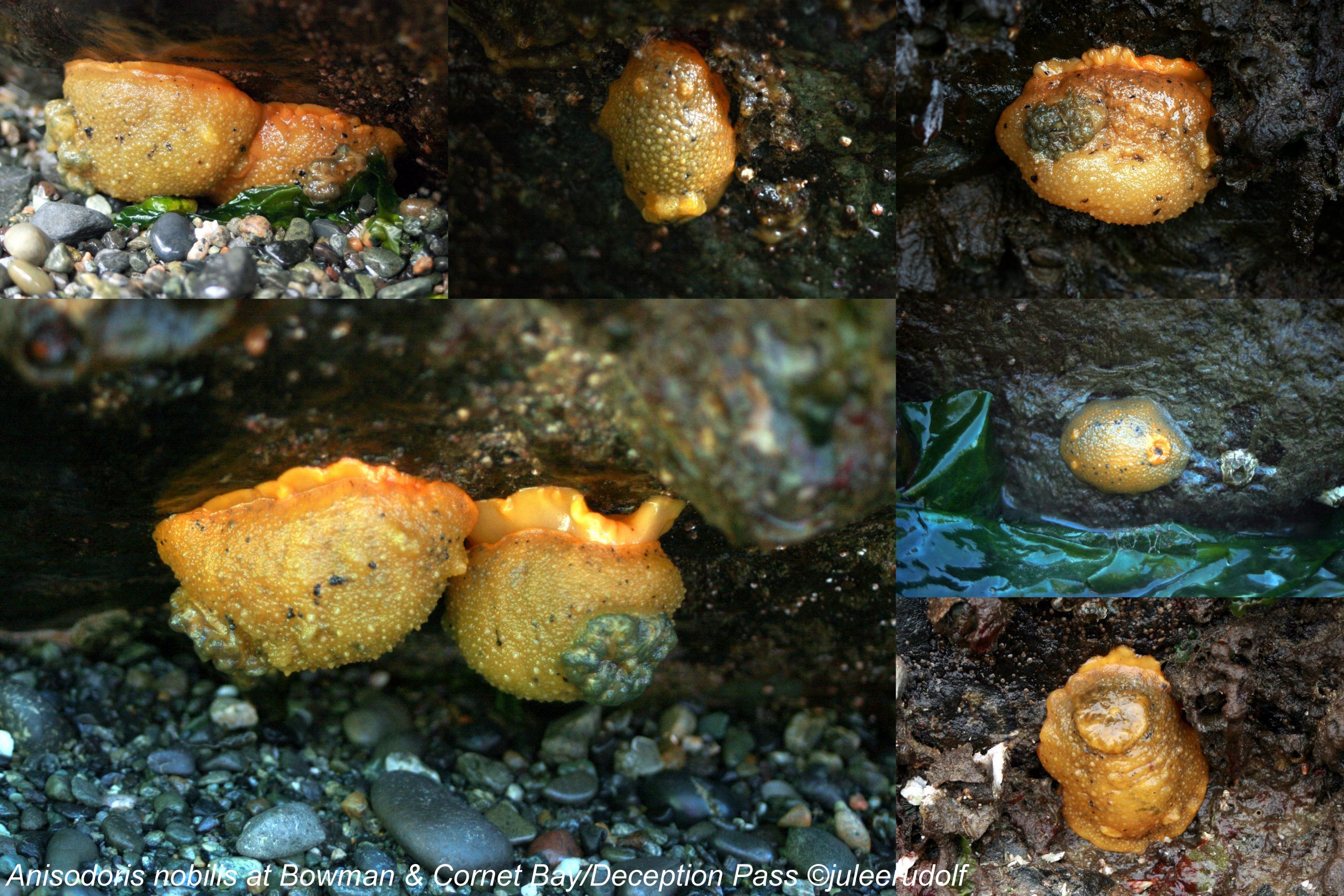 …Nudibranchs derive their coloring from the food they eat, which helps in camouflage, and some even retain the foul-tasting poisons of their prey and secrete them as a defense against predators…Nudibranchs are simultaneous hermaphrodites, and can mate with any other mature member of their species. Their lifespan varies widely, with some living less than a month, and others living up to one year.” “…they have a set of both male and female reproduction organs. However, they cannot fertilize themselves. Mating couples often fight one another over who is the male and who is the female. Once fertilized, they are able to produce up to 1 million eggs which are usually deposited within a gelatinous ribbon-like spiral.” The discovery of one-third of the planet’s 3,000 known species is attributed to one man, Dr. Terry Goslinger, a curator at the California Academy of Sciences in San Francisco. 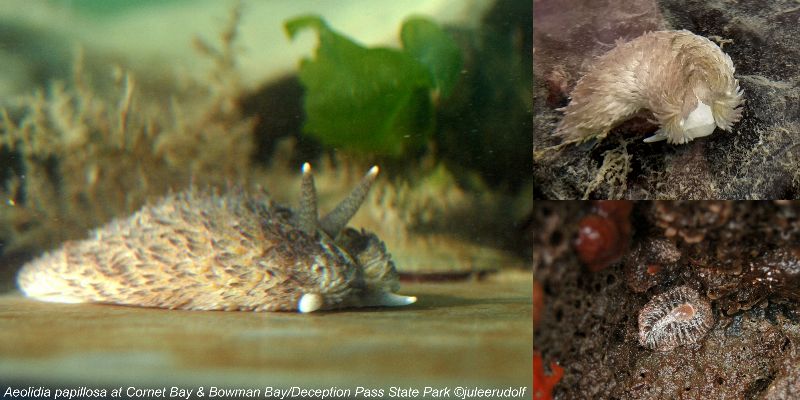 According to biologist Dr. Russell Wyeth of University of Washington’s Friday Harbor Laboratories (The Secret Lives of Sea Slugs), this creature is commonly used for neurological research because, “It has a relatively small number of large, color-coded nerve cells that always appear in the same place in a relatively simple nervous system that controls behaviors that are easy to study under conditions of neurophysiological experimentation.” 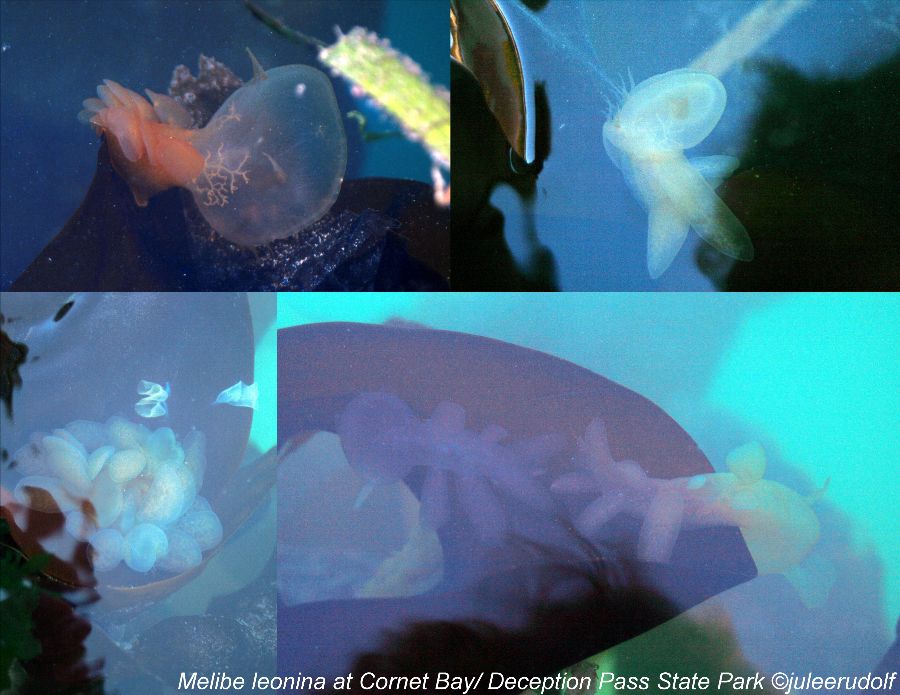 The Table below was created by Dr. David Cowles of Rosario Beach Marine Laboratory (a campus of Walla Walla University, located just outside the limits of Deception Pass State Park), the Invertebrates of the Salish Sea site includes photographs, scientific classifications of and information about 24 species of nudibranchs, including six that I’ve observed at Cornet Bay, Bowman Bay and/or the Anacortes Marina: Aeolidia papillosa, Anisodoris nobilis, Dialula sandiegensis, Hermissenda crassicornis, Melibe leonina, and Triopha catalinae. 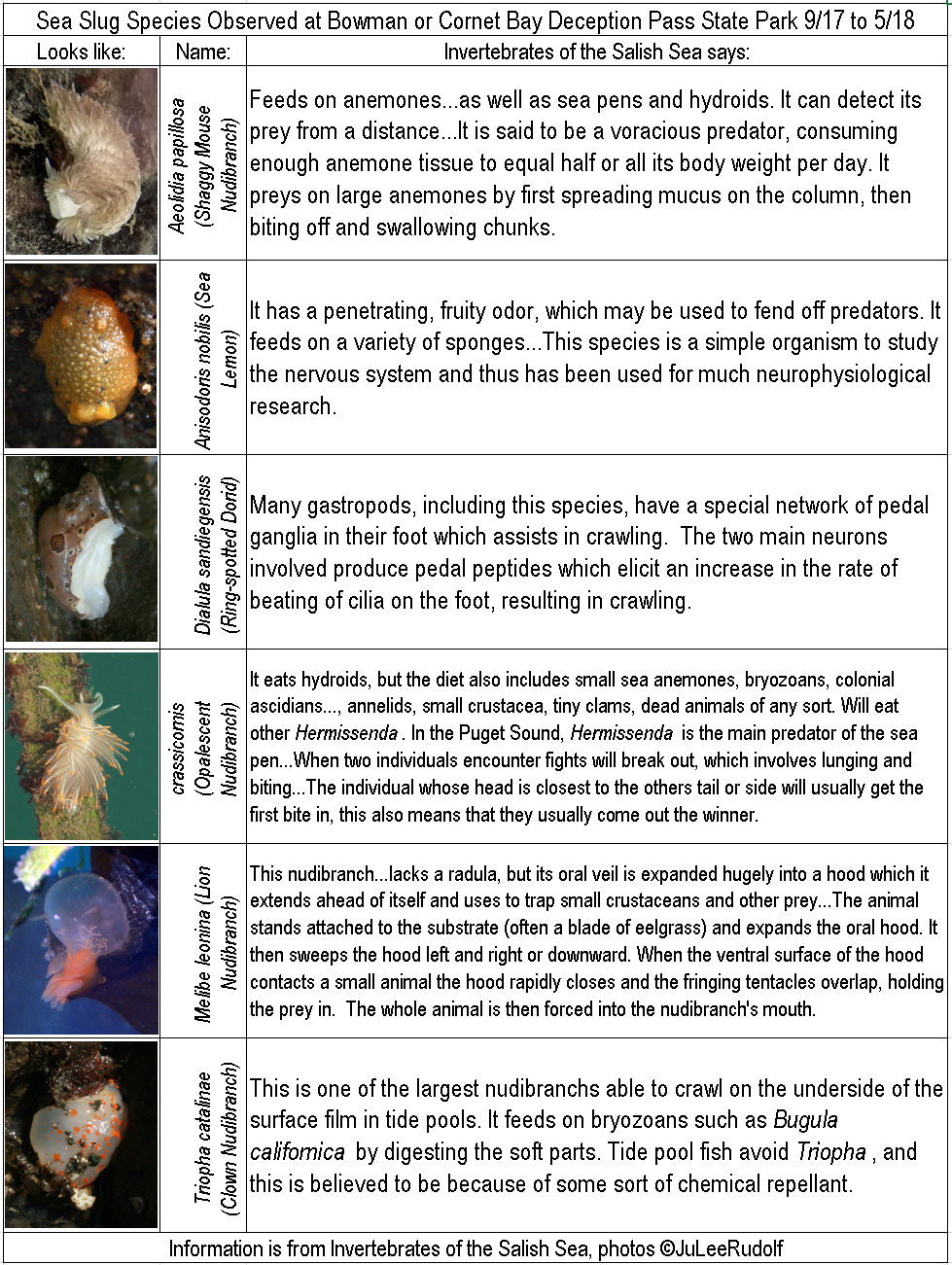