The Maiden of Deception Pass

The Maiden of Deception Pass
By Elizabeth Bentz

Picture Rosario Beach. The soft sands of the shore, the rocky tidepools, the beautiful ocean views, the sound of the waves softly crashing ashore, and the Maiden of Deception Pass watching over it all.

This Winter the Deception Pass Park Foundation, in partnership with Washington State Parks and the Samish Indian Nation, replaced the panels around the Maiden of Deception Pass story pole at Rosario. The old panels were deteriorating from the elements and the beautiful, culturally important Samish story could hardly be read. The new panels revived the story’s words depicting the guardian of the sea, Ko-kwal-alwoot, who looks over her Samish people. For those who are unfamiliar with the story pole, the Maiden of Deception Pass is an iconic element of the park. The history of how this magnificent story pole was created, makes one pause to reflect on the strong connections between community and place.

It all started in 1980 when a local Anacortes artist, Bill Mitchel, created a citizens group to bring public art focused on the island’s history to the area. Two years later, in 1982, Mitchel presented a small wooden replica of the Maiden to the group. Mitchel believed the Samish, whose members had always called the island their home, were an integral part of Fidalgo’s history. The Samish supported the idea for a story pole. Their federal recognition was lost due to clerical error and their members were spread out across the world. They hoped the story pole would help to build connection for tribal members to the land and their heritage.

The construction of the Maiden began on March 1st, 1983 when a cedar log was brought from Mount Baker to the house of a local carver, Tracey Powel. Powel, in close connection with tribal members, was tasked with bringing the Maiden to life. The carving was to show the two sides of Ko-kwal-alwoot: the beautiful maiden on one side and her life in the sea on the other.

Once the Maiden was carved, a home was needed for her, and Deception Pass State Park was the favored location. A 5-foot model of the Maiden was carried around the park as Grandma Laura Edwards, a Samish Ancestor, decided where she would finally rest. On September 24th, 1983, the Maiden story pole was placed at Rosario Beach and dedicated by the Samish. 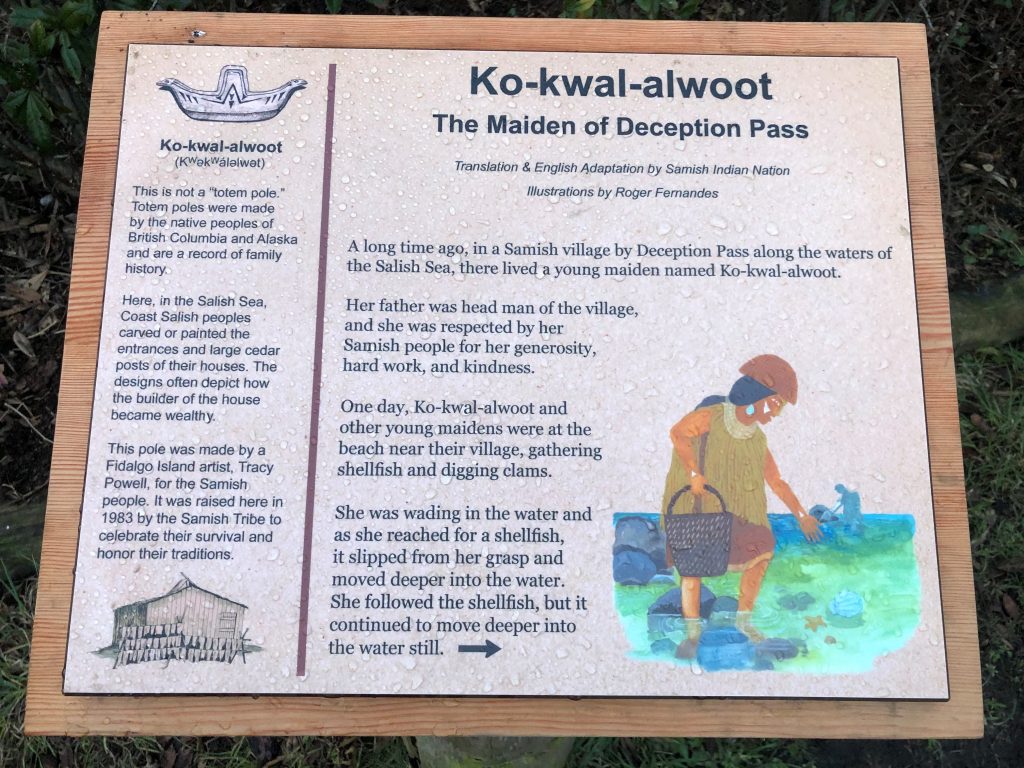 Today, visitors from all over come to see the Maiden and read her story. The Maiden of Deception Pass honors a place for members of the Samish Indian Nation, who are once again a federally recognized tribe, to celebrate their heritage and connection to the land. Here she will remain to share her story and guard over her Samish People.

Much of this article was summarized from the Maiden of Deception Pass video created by the Samish Indian Nation.