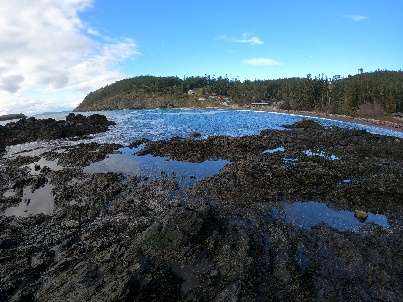 Have you ever looked into a tidepool and observed the life within? Tidepools are small bodies of water that encapsulate a complex ecosystem and intricate food web. Tidepools form from the changing tides. As high tide recedes and gives way to low tide, water becomes trapped in the grooves of rocks. At Deception Pass State Park, the tidepool rocks are volcanic in origin with jagged and sharp edges. These sharp points and crevices are perfect places for water to catch and form tidepools. Many creatures call these tidepools home and an entire web of life exists in these small habitats. The intertidal zone provides an exciting and complex food web to explore.

The food web of the intertidal zone begins with a producer. One important producer in a tide pool is phytoplankton; microscopic organisms that live in aquatic environments and float along with the ocean’s tides. Phytoplankton cannot be seen to the naked eye, but millions are floating within tidepools and each wave replenishes the plankton supply.

The microscopic phytoplankton provide a tasty snack to many fish and crustaceans. Within the Deception Pass tidepools, small crabs and hermit crabs feed on plankton as primary consumers. Life for the primary consumers can be difficult and they must balance finding food and shelter. Small crabs are often hiding under rocks to avoid predators as these predators wait patiently for the crabs to scurry by.

Continuing the tidepool food web, a carnivorous and unassuming predator lurks within the 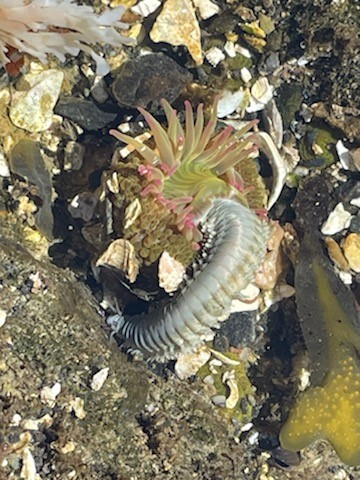 shallow waters. Sea anemones are largely sessile creatures that use their poisonous tentacles to capture small animals that stray too close. Each tentacle is covered with stinging cells called nematocysts. When a crab happens upon the tentacles, the stinging cells open and fire their barbed tubules which pierce the crab and inject poisons. This predator also possesses a strong digestive system which can digest the flesh of a small crab within 15 minutes. 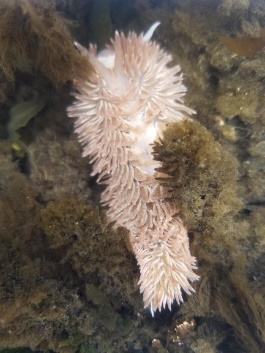 nematocysts by spreading a mucus on the anemone’s column and biting off chunks. When they feed on anemones, the shaggy mouse can store and repurpose the anemones stinging cells in their own cerata for defense.

Tidepool are intricately woven ecosystems where a multitude of interactions take place unbeknownst to the naked eye. These microcosms contain a diverse community with an intricate food web of producers and consumers. Next time you approach a tidepool see if you can spot these predator and prey interactions happening withing the small tidepool ecosystem.