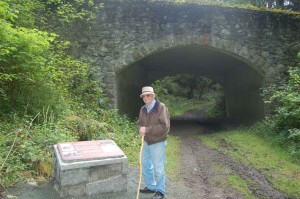 Deception Pass State Park was home to two camps of Civilian Conservation Corps (CCC) members during the 1930s and early 1940s.  They built trails, benches, kitchen shelters, wash rooms, and caretaker residences that are still in use today.  One of the largest projects that Corps members helped with was the construction of an underpass to connect the east and west sides of the park.

John Tursi was one of the Corps members who worked on the underpass.  Although he was transplanted from New York when he joined the CCC, Tursi has remained in Anacortes ever since.  Tursi has been an active supporter of the Foundation and Deception Pass State Park.

In 2010, the Foundation produced and installed an interpretive sign to honor the lasting contributions of Tursi and his fellow CCC members to Deception Pass.